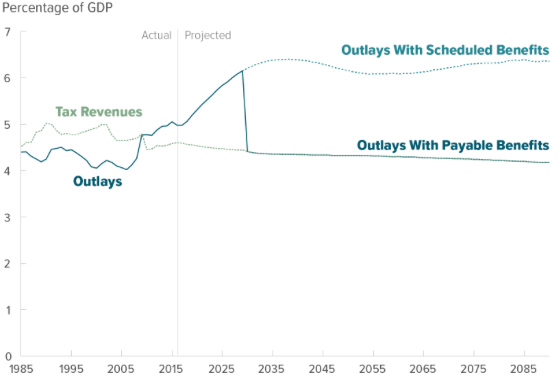 As an Investment Advisor, and for Evergreen as a whole, we have clients who show great concern about receiving their Social Security checks in the future. They have been told Social Security is going to fail soon by politicians, TV news media, radio show host, newsletters, blogs, financial planners and even family members. An example of this is an article from Zero Hedge titled “Scathing New Report Shows Just How Bankrupt Social Security Really Is“.(1) The following sentences come from the article:

It’s absolutely incredible. The government is publishing this data in black and white. They’re telling anyone who’s willing to listen that Social Security has dug itself into an impossible hole. More importantly, they’re telling us there’s a 0% chance that the government will be able to honor its existing commitments.

They’ll either have to radically raise taxes, or simply reduce (or eliminate) the Social Security benefits that they’ve been promising taxpayers for decades. The younger you are, the steeper the price you’ll pay. If you’re in your 60s, for example, you may likely see your benefits cut. If you’re in your 40s or 50s, you can count on it. And if you’re in your 30s or younger, you can not only forget about Social Security, but you can expect to pay more and more taxes to bail out a program that won’t be there for you when it comes time for you to collect.

The vast majority of Americans will be highly dependent on Social Security in retirement, yet 77% of workers are worried that Social Security will run completely out of money by the time they retire according to the Transamerica Center For Retirement Studies.

Lets go over numbers to see what the truth is about Social Security and what are the options Congress is talking about as possible solutions.

How Social Security is Funded

Social Security is a U.S. government program for providing retirement payments from the OASI Trust Funds (Old Age and Survivor Insurance) and disability payments from the DI Trust Funds (Disability Insurance) to its citizens. It was established in 1935 and is by far the largest annual expenditure by the U.S. federal government with an annual program cost of more than $900 billion or approximately 25% of federal spending.

Social Security is funded primarily through payroll taxes at a rate of 12.4% of individuals’ earnings up to a maximum earnings level of $118,500 in 2016. Employers usually pay half the amount with employees paying the other half. Self employed workers (like myself) pay the entire 12.4%.

Over a period of decades, revenue from payroll taxes exceeded benefit payments so the reserves were invested in U.S. Treasury Special Obligation Bonds with interest from those securities credited to the trust funds.

As of December 2016, the trust funds had a balance of $2.85 trillion invested in Special Obligation Bonds issued by the U.S. Treasury that pay an average annual interest rate of about 3%.

A Pay As You Go System

The reality is Social Security is a pay as you go system as money flows into the trust funds from taxes and flows out to pay beneficiaries.

FYI, the SEC states the definition of a Ponzi Scheme is, “… an investment fraud that involves the payment of purported returns to existing investors from funds contributed by new investors.” (3)

In 2010 the amount of Social Security outlays exceeded the amount of revenue received (excluding interest) for the first time. In fiscal 2016 outlays were $922 billion compared with $869 billion of non-interest revenue. If we include interest on the Special Obligation Bonds, the Social Security trust funds had $957 billion in receipts in 2016. That means trust fund balances got bigger by about $35 billion between 2015 and 2016.(4)

Click to see the tables produced by Social Security

The Congressional Budget Office estimates that the disability trust fund will be depleted by 2022 and the retirement benefits trust fund by 2030. The Social Security Trustees conducted a similar analysis and estimated the trust funds combined won’t be depleted until 2034.

I would like to point out that there have been years in the past where the Social Security Trust Funds were being depleted, but then later recovered due to demographic or congressional changes. From 1974 – 1981 expenditures exceeded the the entire revenue received by Social Security.

Under current law, the Social Security Administration can only make benefit payments out of the trust funds so once they are depleted, beneficiaries will only receive payments in a given year that matches the amount of tax revenue paid into the trust funds.

What are the options Congress is talking about in order to fix this issue?

That means Social Security would only replace 32% of the average worker’s annual pre-retirement earnings down from 45% before the cuts.

For the lowest income quintile, Social Security would go from replacing 80% of pre-retirement income to 58%.

Lets not forget who publishes the nations inflation (measured by CPI), it’s the federal government. Changing the way CPI is measured reduces the increase in future Social Security payments to recipients.

Increasing either the full retirement age (ranges from 65 to 67 depending on date of birth) or the starting age of withdrawal eligibility (which today is at age 62) is the solution executed by most company pension plans.

Congress could close the gap between promised benefits and expected receipts by raising additional tax revenue, such as applying the 12.4% payroll tax to an individual’s entire earnings instead of earnings only below the current ceiling of $118,500. This would mean the top quintile of earners would pay significantly more into the Social Security system than they would receive in benefits.

Congress could also elect to increase the 12.4% payroll tax. The current proposal is to increase the payroll tax to 15.2%. However this tax increase would directly effect self employed, middle class workers and more so to low income workers the most. (4)

An alternative approach to cutting benefits or raising taxes is for the federal government to change the rules to allow Social Security to run an annual deficit.

This could be accomplished by having the government continue to spend the money on benefits. The federal government as the issuer of the nation’s currency has the ability to create money by simply crediting the recipients’ bank accounts if Congress elects to do so.

Since 2010, the federal government has been borrowing to cover the shortfall between Social Security receipts and beneficiary payments. The interest on the Special Obligation bonds held in the trust funds are essentially paid with government borrowings as it issues new U.S. Treasury bonds each year to cover the federal budget deficit.

No matter what happens, productivity growth is essential. Why? Because what matters is whether in the coming decades the U.S. economy is sufficiently productive to produce the goods and services retirees need to live on that they can buy with their Social Security benefits.

The Federal government’s constraint in its ability to create money and spend is whether there are ample goods and services to be bought.

I believe there are better options to solve the problem of Social Security. Some argue we shouldn’t have Social Security and propose plans to roll it back to where it doesn’t exist in the future. Others offer solutions to change the complete structure of how the trust funds receives their revenues. The best alternative solutions I feel…will be in my next article. Alternative Solutions to Social Security